The motion series is a collection of kinetic sound art sculptures where the movement of a suspended stone casts a moving shadow on a solar panel. In effect, this movement modulates the light intensity incident on the photovoltaic cells and creates a fluctuation in the electrical output of the panel. This electrical signal is subsequently used as an audio signal and fed to a soundboard to be amplified and processed.
.

The suspended stone is in a constant swing motion, the resulting sound has a distinctive feeling of motion, depending on the viewer’s position, this feeling can be from left to right or from back to front. 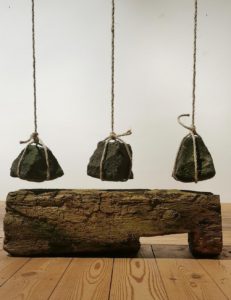 Three suspended stones are in a constant swing motion each stone has a phase offset of +1 for the first stone and an offset of -1 for the 3rd stone, both in reference to the middle stone which features an offset of 0, resulting in a rhythmic cadence of 3 swing sounds.