Sérgio, a Portuguese born in Nice France, grew up in Antwerp Belgium.

In 1989 he dropped out of Art school. An immigrant without a degree, not many opportunities were open to him, besides various factory jobs via temp agencies. Looking for a way out, inspired by a tv piece he saw on Nicola Hulot’s Ushuaia, he started “Extended Motivation” an initiative dedicated to organising  Bungy jumping weekends from Belgium to the south of France. After a few successful trips, but lacking the entrepreneurial skills to take it further.

He took on a job in Scaffolding at Edwin Shirley, working on The Rolling Stones “Urban Jungle” concert in Newcastle UK(1990). This is where he discovered his passion for lighting as it tied in with his 2 passions as a child and teenager, photography and computers.

Armed with his new found passion he returned to Belgium to start working as a stagehand on various concerts, quickly moving on to becoming a lighting director and shader for Belgium’s first commercial tv station VTM and subsequently the more alternative K2 and as lighting artist in various legendary Belgian clubs.

Sergio in his spare time started to express himself artistically by designing experimental websites(1995).  This led to him being headhunted by Walter De Brouwer to join Riverland as a new media researcher    part of MIT’s Media Lab TVoT (Television of Tomorrow) consortium.

Part of the team at Riverland led by Annelies van Opstal and later joined by Michael Samyn, Jef Morlan and Richard Lachman, creating web productions such as “History of a media planet”

In 2000 Sergío and Frank  each went their own way to focus on their personal projects. Sergío became an active member of the Eyecandy mailing list under the moniker VJ Iko, started to share much of his knowledge, experience and vision.

When stimulating the majority of our senses at the same frequency, little room is left for the brain to wander thus creating an immersive state. In order to achieve this, we cannot only consider the content of the projected images, we also have to take into account the effect off the reflected light of the screens, how they fill the room and bounce of the walls.

Over the years Sergio has been invited to host workshops and master classes on these particular subjects, in Australia, France, and Portugal.

Invited to perform at the 2001 cultural capital of Europe, Porto, he attended a MaxMsp workshop hosted by Johnny Dekam and Brian Kane. Learning Max patching opened up a whole new world of interactive possibilities.

2001 is also the year he and Andre Rangel founded  Ula.li. In 2003 they were responsible for the interactive architectural sound and light installation Tu trazes Cor at Rem Koolhaas’ Casa da Musica in Porto for the inaugural festival Obra Aberta.

In 2005 Sergio began to explore and create virtual experiences, this led him to be invited in 2006 by the Ars Virtua Gallery and the New Media Center to present his virtual installation Immersivity through Synchronization.

Under the Bologna Process and thanks to his past work experience, Sérgio was able to join the Masters program in Digital Art at the Minho University. As part of his studies he developed an interest in collaboration processes, calm technology, and “moist media”  a term coined by Roy Ascott.

“Moist Media: A form of art that represents the fusion of biological processes and computing.”

Inspired by Roy Ascott, Ken Rinaldo and Eduardo Kac, Sérgio designed “Among” a sound and light installation controlled by ants, for which he was awarded an Ibero American artistic production incentive by Fundación Telefónica at Vida 13.

In 2011 he cofounds Public-Reality with Rui Monteiro to work on a large scale video mapping show, mapping the whole castle of Montalegre.

The project involved over 150 participants, regional, national and International professionals and amateurs. Bringing together across generations of communities and customs a visual and physical theatre show directed by Mariana L. Ferreira, Paulina Almeida, Rui Monteiro and Sergio S. Ferreira. A co-production with CEBTT (Centro Estudos do Barroso Teatro e Tradições), the Ecomuseum Barroso and the Municipality of Montalegre.

In 2018 Manel Alao joins Public Reality and invites Sérgio to exhibit his light sculpture “Hope” and co-design several other light installations for the Mescla festival in Viseu. 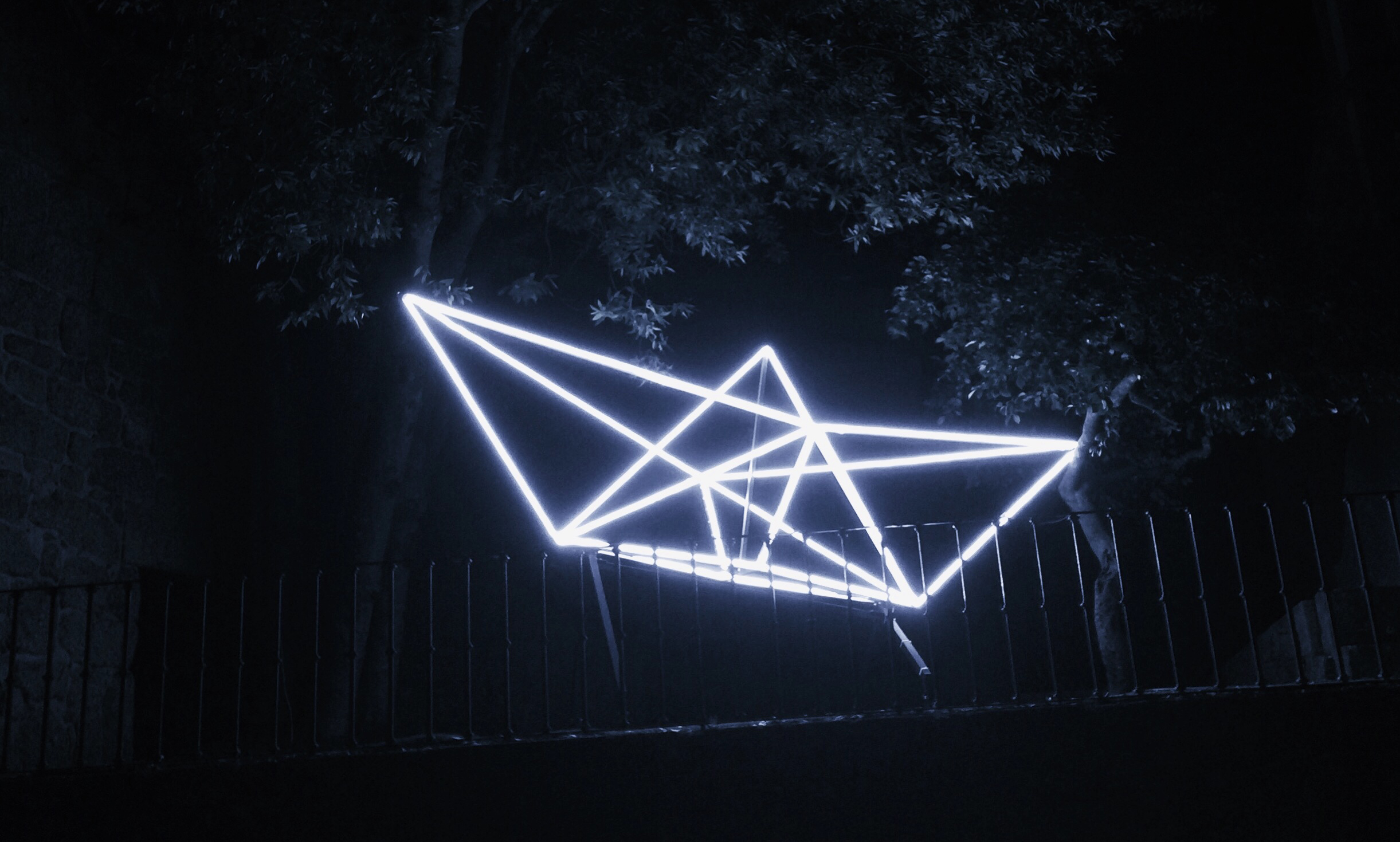 When we see a boat, we can wonder why is it here, where did it come from, where is it going ?
We can fantasize and imagine answers. We can flip through our imagination giving an imaginary
valuation to the plausibility of each of our imagined answers, rate them on a scale. Letting
our minds wander is of great value. ⁣At the same time we may not forget that for a lot of people
a boat, just means hope, the hope of staying alive and reaching the otherside where life will be
safer.

2019 Sergio creates the Frequency Farm a monthly curated video show in the virtual world of Sansar. The event takes place at a virtual venue build by Elvenmade.

Sérgio and Frank reconnect after almost 20 years of each following their own path, they finally join again and form Kosen.Solar, a production project, working across various media to produce audio visual performances and installations. The use of photovoltaic cells to generate sound has been a common characteristic shared by Kosen Solar projects, although Kosen Solar is slowly evolving and growing toward being a broader platform / label.